We had the chance to review the recent proposal from our friends at Arca and Polychain and wanted to share our notes with the community.

(2) Yield is determined by how long depositors decide to escrow the ANC portion of yield.

(3) Borrowers can earn up to 1.5x boost on ANC rebates proportional to the borrower’s amount of veANC.

The Arca and Polychain teams have invested time and energy into thinking about how to improve Anchor. It goes without saying that we appreciate and respect their efforts.

With that friendly caveat to start, Arrington Capital is not aligned with modulating depositor economics through ANC. Whether accomplished by locking ANC or through ANC-denominated payouts, we think this approach is not philosophically consistent with the core innovation of Anchor.

Anchor’s innovation is its extreme simplicity. It is an intuitive protocol that turns volatile PoS staking rates into UST yield. Increasing tokenomic friction for depositors may appeal to degen TeFi but clashes with Anchor’s value proposition as a primitive. Anchor’s vision was to be a fixed savings product for mainstream users and fintechs – “Stripe for Savings”. It does this by aggregating unlevered PoS rewards, using them to subsidize borrowers and create a stable yield.

Anchor is not there yet. In March 2021, we published a paper titled Resurrecting The Saver: Walking Tall With Anchor. In the third section, we describe Anchor’s vision to employ dynamic interest rate targeting. Anchor could become a “financial control system”: as PoS yields change, the system dynamically adjusts the borrower subsidy such that “the Lending Rate equals the Anchor Rate”.

This is not how Anchor functions today. The Anchor rate is not dynamic. It doesn’t adapt to PoS yields. The Anchor Rate does not encompass enough PoS collateral types to be considered a broad-based source of PoS yield. Anchor is far from its original vision.

With that said, it’s not clear to us that the answer is more DeFi wizardry – especially if this financial engineering forces depositors to deal with the added complexity of the ANC token. 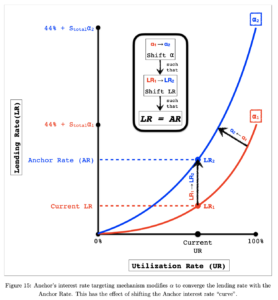 The TeFi Degen or The Mainstream Normie?

Tokenomic experiments appeal to the marginal degen in TeFi but add layers of friction for new users. The current proposal could deter non crypto-natives from Anchor. The mental overhead of ANC escrows could detract ordinary users and Web2 customers.

Mainstream users have a premium on simplicity: they’d rather tolerate lower-yield, lower-complexity products than higher yield, higher complexity products. Think about the company Alice. They are building a simple fiat gateway to Anchor. How does making ANC critical to Anchor deposits complicate user onboarding? Full disclosure: we are seed investors in Alice.

The question is – how do we get to Anchor’s original vision if it isn’t through experiments that use ANC to tinker with depositor dynamics? A few suggestions (most of which are already being discussed by the community). More emphasis should be placed on incentivizing and increasing borrowing demand by adding new collateral assets. We like Retrograde’s proposed crypto-economic and governance games. Even though they add complexity, they focus on the borrower side. They don’t create friction for depositors.

Point (3) tries to incorporate these games but it’s not clear where the additional ANC rebates come from and whether the ANC inflation rate will need to be adjusted. As an aside, there’s another elephant in the room. Are ANC tokenomics broken? If so, how broken are they? Currently ANC governance staking already returns 9%+ in kind. This is pretty good. ANC governors already receive relatively healthy cash flows.

Anchor synchronizes with crypto cyclicality by experiencing higher borrowing demand during bull markets relative to deposits and experiencing the opposite during downturns. The high borrow demand in bull markets – in theory – helps to replenish the yield reserves to feed the deposit yield during the winter.

Anchor has not had enough time to build up its reserves as well as the diversity of its collateral base. Borrow demand should grow as UST gains traction as a decentralized stablecoin. We are long term investors in Anchor and believers in Terra’s design philosophy: double down on simplicity and a great user experience that abstracts away the complexities of crypto. We may disagree with the proposal but we thank Arca and Polychain. They are helping to spark important conversations that push Terra forward.